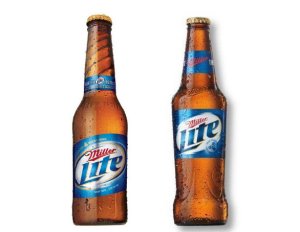 Just look at those curves. You see, it right?

Corporate beer commercials have always (mostly) been pretty annoying, from Spuds MacKenzie right on up to the Coors Light train (whatever that thing is called) spots.

And as you know, the latest round of Miller 64 commercials is just a rip-off of the Popeye theme song. That’s a whole other level of annoying.

But for some reason, the new Miller Lite ad is really getting on my nerves. It makes me twitch. And I’ve gotten to the point now where I instantly change the channel when it comes on, just like I have done when faced with a teaser for that Honey Boo Boo nonsense.

I’m sure you’ve seen the ad, but if not, here’s the scene: Four young guys, out on the town at a really swanky bowling alley (?), spot a roller-skating (?) waitress across the room carrying a single Miller Lite bottle on a round tray, and thus begins a dialogue, rich with subtext and nuance, which goes something like this:

“You people are f*cking stupid.” (Clarification: That was me in my living room, not someone in the commercial.)

At that point, or thereabouts, the super-hot waitress (at least they got that part right) appears in front of them with a tray that now mysteriously has FOUR (?) curvy new bottles of Miller Lite, and she says … well, I’m not sure what she says, as I’ve never been able to watch that part. I always change the channel first.

Cunningly, Miller Lite’s marketing geniuses have chosen to avoid getting into the “vented can” war with Bud Light and Coors Light. Instead, Miller Lite is focusing on the delicious, triple-hopped product it sells to consumers.

I’m kidding; actually, it is focused on the shape of the bottle, which is just another way to avoid talking about what’s inside it. Makes me miss the days of “Tastes Great/Less Filling” – at least then they were just calling it like they saw it, and letting the consumer decide whether he or she could stomach the flavor. I guess that approach – along with that vortex neck thing – is out of vogue. Why? Here’s why, via a press release straight from the horse’s … er, mouth:

Inspired by form and design, the modern look of the new bottle offers broad shoulders and a contoured grip, intended for easy handling from the bar to the pool table. The bottle defies the convention of the standard cylinder-shaped bottle, helping Miller Lite stand out among the brown bottle sameness of other light beers.

“Miller Lite is giving beer lovers a long-overdue reinvented look and drinking experience with the breakthrough new bottle design,” said Ryan Reis, senior director of Miller Lite, via the same press release. “In our testing, consumers overwhelmingly preferred the new bottle to the standard beer bottle. We’re proud of the new design and we’re excited to see how everyone reacts to our new look. This time when you grab a Miller Lite, you’ll know it.”

I mean, yeah, the fizzy yellow stuff inside still tastes like socks, but by god, that bottle sure does feel good in your hand. Excuse me. I need to go scream into a pillow.