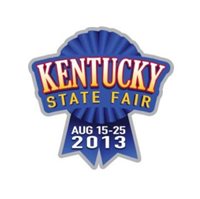 The Kentucky State Fair is about a lot more than livestock, deep fried candy and that creepy Farm Bureau giant – there’s also the annual homebrew competition, and this year there are 529 entries.

Yeah, that’s a lot of entries. Leah Dienes of Apocalypse Brew Works is the person charged with making the judging happen. I chatted with Dienes, and she told me she has 48 judges from Kentucky, Indiana and Ohio on board, and nearly half are Beer Judge Certification Program (BJCP) certified; this number includes two national judges and a master judge.

Here’s how the judging works: Each beer receives a written sheet describing its aroma, appearance, flavor, mouthfeel and overall impression, and two judges will score each beer based on these categories. They are separated into the 28 BJCP styles, and those are also separated into the 80 substyles.

Dienes said that between the two scores, with an allowable margin of 7 points between them, the final score is determined within a scoring range of 0-50.

“Each beer takes an average of 12 minutes to score,” she said. “The sample poured is usually one to two ounces, and yes, we do drink them.” 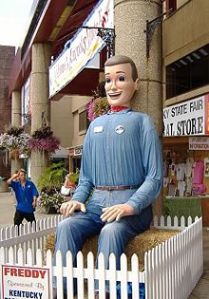 Creepy. As. Hell. Luckily, he’s not part of the homebrew competition.

I asked about palate fatigue since, well, that’s a lot of freaking beers. She said while it can be a problem, the way it is dealt with is to keep flights somewhere between 8 and 12 beers.

Judging takes place tonight starting at 7 p.m. and tomorrow morning and afternoon (9:30 a.m. and 12:30 p.m.) with multiple flights each night. If you’re at the fair, be sure to stop by and check it out.

And if it sounds like fun, well, Dienes said it absolutely is.

“The fun part is the free BJCP app that breaks down all of the beer styles individually and includes classic examples of each,” she said, “so you can drink and read what the judges are looking for.”

Dienes, of course, has been a participant – and usually a big winner – in the state fair contests before. Her advice to would-be brewers is of the common-sense variety.

“My philosophy is to brew what you want to drink,” she said, “since you only enter a couple of bottles. Competitions are great for honing your brewing skills since there are specific parameters the judges are looking for in each style.”