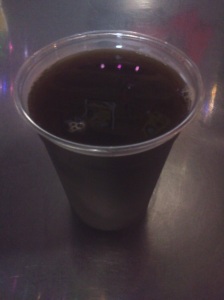 Peanut butter beer has landed on the Louisville beer scene. And it’s pretty darn interesting, too.

I walked from my place in Clifton to Apocalypse Brew Works yesterday evening just to have a pint and hang out for a bit, and brew master Leah Dienes quickly said, “We just put a new beer on tap.” I looked up at the familiar blackboard listing all the current offerings, and there it was in the No. 6 hole: “Peanut Butter.” No fancy end-of-the world name, no ABV or IBU numbers – just “Peanut Butter.”

I had to try it. Wouldn’t anyone?

Well, I imagined it was one of those beers that would probably have just a hint of peanut in it; you know how some flavored beers end up with only traces of the featured flavor left to battle it out with hops or whatever? But when I took my first whiff, the nose of this beer floored me. It smelled like opening a bag of Reese’s Pieces or something. I couldn’t believe it. I was ready to pour it over some pancakes. Or dunk a banana in it.

The flavor is not quite so peanut-buttery, however. The peanut is there, but the beer ends on the palate as more of a sweet, mild nut brown ale. Not that that’s a bad thing. The good news is that the nose is so distinctive that the experience becomes very close to what it must be like to drink a Reese’s cup.

“Did you use Jif?” I asked Leah about halfway through my pint.

“We’ve got little elves who crush peanuts and make it for us,” she said. 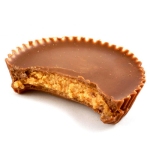 I guessed the beer at about 4.5 percent ABV, and was way off.

So it’s also a sessionable beer, which is also nice. I’m not into sweet beers, so I doubt I’ll be having much more of the stuff, but I’m glad I tried it. Cheers to Leah for coming up with yet another interesting concoction. Will this end up being the Watermelon Crack of autumn? Time will tell.