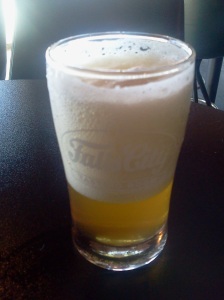 The “Hispter Repellant” IPA was, indeed, a little angry.

I took my dad to the Falls City Beer tasting room over the weekend and got a nice surprise: As if free samples of good Louisville beer wasn’t enough, we also got a tour of the brewing facilities and a sneak-preview taste of a new IPA that is, at least internally, being dubbed “Hipster Repellant.”

Hipster Repellant (which may or may keep its name when released to the public) is a special brew made to be available at Louisville-area Liquor Barn locations. While it had just been kegged and therefore was a tad over-carbonated when Falls City’s Rob Haynes poured the samples, the nose on this beer is outstanding.

“It’s a little angry,” he said, referring to the over-foam. When I mentioned the nose, he said, “I just want to huff it.” Indeed. It has less of a hop bite than the nose suggests, but there is still plenty there — I’d guess it at around 60 or 65 IBU. It’s crisp and smooth, with a creamier mouthfeel than I expected — although that very well could have been pushed along by all the foam.

We also tried a couple of other new-ish ones now on tap at the tasting room:

Kentucky Waterfall APA (6.6 percent ABV, 40 IBU): Straw-colored, mildly cloudy and crisp, this drinks like a great summer beer. My dad isn’t what you’d call a hop-head, and he really liked this one. It’s surprising this one is 6.6 percent alcohol, because on the palate and nose it could pass for a session beer. It’s a solid entry.

502 APA (5.5 percent  ABV, 55 IBU): Of course I had to try this one, simply because of the name; maybe this can be the official beer of 502Brews.com. Made with Amarillo hops, this one is a brilliant orange color, very dry on the finish, crisp and lager-esque. I could drink this stuff all day.

Here are some pics I shot of the brewing equipment and other odds and ends: