When Tisha Gainey got married in May of 2012, she walked down the aisle not on rose petals, but on hops.

She called the wedding to her husband, Ryan, a very “beer-centric” event that included an 18-keg reception, including a specially brewed “I Do Ale” that brewers Joel Halbleib and Eileen Martin helped the couple create.

“Only two people puked,” Gainey says, shaking her head. “We had the wedding that even men still talk about.” 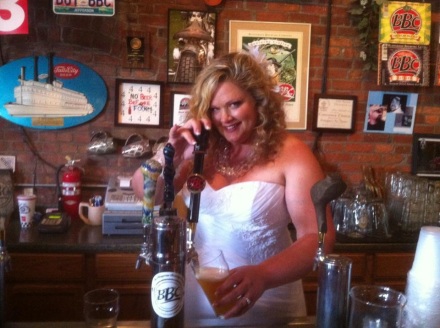 “I said, ‘We need to have a beer festival here,’” Gainey recalls.

The beverage director for Buckhead Mountain Grill and Rocky’s Sub Pub is taking it one step further with her latest beer-obsessed project, the Tailspin Ale Fest. Organized in conjunction with DRAFT Magazine, the festival is set for Feb. 22, and Gainey promises it will not be your average beer festival.

Held in the Louisville Executive Aviation hangar, the event will have a theme to match the hangar’s heritage, Gainey said. She also noted it is the oldest operating air hanger in the United States, which had its own appeal.

Besides, she says, “How many beer festivals have you heard of being held in an airplane hangar?”

As part of the theme, a historic plane will be set up in the hangar with a pilot and women dressed in 1940s-era “pin-up girl” attire for photo opportunities (four hours of beer drinking and pin-up girls should create some interesting photography).

In addition, there will be a Kentucky Heritage section in the center of the festival, featuring 12 Kentucky breweries, and each brewery will have a beer on hand that represents Kentucky in some way, be it a Bourbon Barrel Stout by Kentucky Ale, or Apocalypse Brew Works’ 1912 Amber Cream Ale, which is loosely based on an old Kentucky recipe.

It also doesn’t hurt that in January and February, there just isn’t a lot going on beer-wise; most of the many beer festivals around Louisville are summer and fall events. Gainey and Trevor Cravens, president of DRAFT, are calling this one a “Winter Warmer” festival, and for good reason.

One reason they felt it was time for another beer festival is the amount of growth in Kentucky brewing, and more is on the way.

“Kentucky only had five breweries a few years ago,” Craven said in a press release for the festival. “That number has rapidly grown to more than 12 statewide in 2014, with more in planning. As a testament to the importance they place on the Louisville market, brewery representatives from all over the U.S. will be in attendance to answer questions and educate patrons about craft beer.”

And Gainey was the perfect candidate to pull off such a festival; she has been working at and helping to plan beer festivals since 2007, which helped provide her the experience to create one of her own. She met Cravens via the early days of visiting the Louisville Beer Store, and they simply kept running into each other at beer events. Soon, they hatched a plan for the Tailspin Ale Festival.

It’s really a full-circle kind of thing – she became interested in beer during college (and who doesn’t?) but was never a light-beer drinker.

“Guinness and Samuel Smith Taddy Porter were my gateway beers,” she says.

Soon she was frequenting Lafayette Brewing Company (near Purdue University) and got hooked on that brewery’s Old 85 Cask Ale. Upon returning to Louisville during the 1990s, she became a regular at Rich O’s (now New Albanian Brewing Company), and later was in the Worthog Club at BBC in St. Matthews through the late 1990s and early 2000s.

While she studied communications and advertising in college and held jobs ranging from Disney to a development company, it was beer that continued to beckon. She ended up landing a job with World Class Beverages as a craft beer distributor in ’07, and that really got the ball – or perhaps the keg – rolling.

After landing at Buckhead and Rocky’s (they are sister restaurants), another project emerged. Because she was rotating so many dozens of taps, she soon realized that it was tough to communicate to customers what beers were on tap.

And so she and Buckhead owner Wes Johnson created their Craft Beer App in cooperation with local programmers GlowTouch Technologies. The app lets customers browse the current draft selection on a digital, hand-held device, and includes flavor profiles, alcohol content, bitterness information, color, etc. The app also has educational features such as Beer 101 and sort functions that, for instance, enable people to find beers that are similar to what they normally enjoy.

It’s like the best toy ever invented, except for adults.

All of this has prepared Gainey for Tailspin Ale Fest. And so on Feb. 22, roughly 40 breweries will gather to pour samples of about 150 craft beers for attendees. There will be live music (probably bluegrass). There will be coffee samples for designated drivers, which is a nice touch. There will be an area for beer education. And Yelp will have a booth doing beer trivia.

And perhaps the show-stopper will be the Mountain of Beer raffle, which will benefit the Dare to Care Food Bank – each exhibitor will donate a six pack or a 22-ounce bottle and, as Gainey phrased it, “One lucky person gets to walk away with a truckload of beer.”

A portion of ticket sales will also benefit Dare to Care; tickets are $40 for general admission or $75 for a VIP package, which includes early admission at 2 p.m., beer tastings from any brewery on site, one food truck voucher, one year/six issues of DRAFT Magazine and a limited-edition growler. Both tickets include a commemorative tasting glass. Designated driver tickets are $10, and all attendees must be 21 or older.

Even though Gainey’s life has guided her on a path lined with beer, she still says it isn’t really her life.

“I don’t think beer is my life, but it’s one of my passions,” she says.

So why a beer festival?

Fair enough. And if the Tailspin Ale Fest is as big a hit as her wedding, look out.