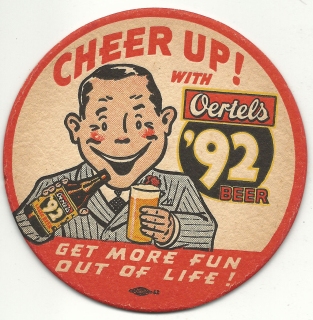 A century ago, most Louisvillians were drinking a beer then known as “common,” a dark, drinkable cream beer that was quick to ferment and thus quickly sold by local saloons on draft.

The style, which originated right here in Louisville, is known as Kentucky Common, and it has been making a comeback with versions being brewed recently by Against the Grain Brewery & Smokehouse, West Sixth Brewing in Lexington, and in a recent collaboration brew involving Bluegrass Brewing Co. and Great Flood Brewing.

But Leah Dienes at Apocalypse Brew Works is working from an actual recipe with her forthcoming release, called Oertel’s 1912. Why? Because unlike most modern Kentucky Common reproductions, this beer was brewed using a recipe from the long-defunct Oertel Brewing Company, which was based in Louisville’s Butchertown neighborhood beginning in the late 1800s.

This is the stuff your great-great-grandfather was drinking –assuming he wasn’t drinking common beer or lager made by Fehr’s, Falls City, Phoenix Brewery or one of the many other Louisville breweries that thrived before Prohibition. Oertel’s actually carried on into the early ’60s, and Oertel’s 92 remained a staple here until the brewery closed in 1967 after having been owned briefly by Brown-Forman. The brand was brewed by other breweries into the 1970s.

Oertel’s 1912 is a different beer style than Oertel’s 92, however, which was a lager and much lighter in color. Working with fellow brewer Conrad Selle, Dienes did research regarding the types of hops grown in the United States at the time the 1912 recipe was in use. In fact, the recipe they used is one that was brewed at Phoenix Brewery, which was located on Baxter Avenue near Irish Hill, following a fire at the Oertel Brewery in 1908.

Here’s the back story of how Dienes came into possession of the recipe: The Oertel brand was briefly revived in the early 1990s when a group of investors recruited former Oertel’s brewmaster Friedrich W. “Fritz” Finger Jr. to create a new recipe; the goal was to open a microbrewery in the old Oertel’s bottling building at the corner of Webster and Story in Butchertown, but the venture fizzled when a proposed restaurant partnership with another group of investors fell through.

She has considered various opportunities over the years to revive the brand, but the sting of the first failed venture and the money she and her family lost in the deal has made her hesitant.

Dienes had long wanted to brew an original Louisville recipe.

“I’ve known Conrad a long time,” Dienes says. “I said, ‘I want to do a historical beer recipe from this time.’ He said, ‘Guess what I have?’” You guessed right – he had Schnur’s phone number.

The two brewers worked on the recipe for about seven months, Dienes estimates. A first batch didn’t quite achieve the color they wanted; this particular beer, based on vintage photographs, was darker than the first batch. So Dienes says she steeped the grains longer, providing a darker look while maintaining a smooth, creamy body.

At about 4 percent alcohol by volume, it’s drinkable and pleasant – lightly tart, almost leaning toward a light sourness, but not quite getting there. In short, it’s likely to be a hit when it is unveiled to the public on May 10 at the Apocalypse Brew Works second anniversary celebration.

“You could drink this stuff all day,” Dienes says, sipping one of the first pours of the beer last week at the Apocalypse tap room.

If Oertel’s 1912 is a hit, Dienes is considering brewing other Oertel’s recipes, assuming Schnur is willing to share.

“Louisville loves it,” Schnur says of the Oertel’s 92 brand. “Especially the old timers. We still have people call and ask if we sell T-shirts and stuff. I have spent money every year to keep it active, waiting for just this type of thing.”