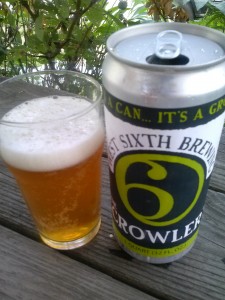 They called it a “Crowler.” To me, it just looked like a big ol’ 40 of delicious West Sixth Brewing beer. But as a loyal growler user from way, way back, I’ll say this right up front: I think this Crowler thing has real potential. It may even unseat the generations-old growler one day.

Can-plus-growler, that’s where the Crowler name came from. Pretty simple, right? It may seem so, but the folks at Oskar Blues Brewing in North Carolina and Ball Corp. have taken the beer can to a new place by creating this system that is on-the-spot sealable. And West Sixth is the only brewery in Kentucky and one of only a handful of breweries in the U.S. to have this system. At least, so far.

Ben Self, co-owner of West Sixth, said their Crowler system went into use a couple of weeks ago. Looks like there’s no turning back.

“We first saw it demonstrated by Ball at the Craft Brewers Conference this year, and knew from the beginning that it was going to be game changing,” he said.

That was my first reaction – it really changes everything. Growler users know that beer will only keep for a couple of days in a glass growler because carbonation dissipates, and oxygen creeps in to slowly but surely spoil the flavor. Meanwhile, most growlers also allow light to get to the beer, which can “skunk” the beer out.

But a Crowler is a can that is filled and sealed at the brewery, locking out oxygen and locking in freshness – at least for far longer than a traditional glass jug or growler. Self said the bartender seals the can with what he referred to as a “seamer” (which is basically the same device home canners use to seal their jars), checking to make sure there is foam on top of the can to ensure no oxygen is left inside. Then he or she uses a Sharpie to write the beer name, date and other info on the side of the can, and you’re off.

When I bought two from West Sixth recently, the bartender told me I could count on about four days of freshness. But Self said theoretically it should last much longer – he said Oskar Blues has tested them for up to a month and found the Crowlers to hold the beer’s flavor.

He added, however, “We do recommend people drink them as soon as possible though because beer is always better fresher.”

Besides, the whole point of having beer is to drink it.

I waited two days to open a West Sixth Crowler of Bogan’s Walkabout ISA; it was crisp and fresh just like the pint I’d had sitting at the bar of the brewery. I also bought a Crowler of Summer SMaSH and waited four days to pop that one open. Same result: delicious, fresh-tasting beer.

There are other advantages over the traditional growler. For one, many people don’t properly clean their glass growlers, and risk affecting the taste of the beer. For another, given the short freshness life of beer in a growler, you’re under the gun to get that beer drunk quickly. For still another, it’s fairly easy to forget to bring a growler to the brewery, or to be caught without one when you happen across a beer you simply must have more of. At that point, you are stuck spending five or six bucks for another growler, even though you have a cupboard full at home.

Crowlers are one-time use. It really is just a big ol’ can of craft beer with a traditional top. You drink the beer – 32 ounces, or two proper pints, which is much easier than knocking off a full 64-ounce growler – and then recycle the can.

The key downside is that the price is higher per ounce. For instance, a growler refill at West Sixth is $11 for those 64 ounces. A single Crowler is $8, which comes out to $4 per pint, saving you a dollar off the $4.50 pint price at the bar. By comparison, the price per pint in a growler is about $2.75. So, theoretically, if you know you’re going to quaff that growler tonight with a friend, you’re probably better off drinking it old school.

But if you know you’re going to want a couple pints of that ISA in a week and can’t get back to the brewery, the Crowler is the obvious choice.

The Ball Corp. website lists a number of advantages that may be less obvious, including:

And Self pointed out that aluminum is more likely to be recycled than glass. U.S. Environmental Protection Agency figures show that in 2012, 41 percent of beer and soft drink bottles were recovered for recycling. The number for aluminum beer and soda cans was 55 percent.

Jeremy Rudolf is the guy at Oskar Blues who helped bring the Crowler into the fold there.

“We get off on pushing the limits, doing things differently,” Rudolf said in a press release, “and the Crowler is another step of innovation to take advantage of what the can package has to offer from behind the bar. More beer options in more cans, we’re working on creating one big glasshole.”

In other words, the growler may just be an endangered species. Self looks for the Crowlers to keep selling, and for brewery demand to keep growing.

“Everyone loves them,” he said. “I see every brewery having one of them eventually.”