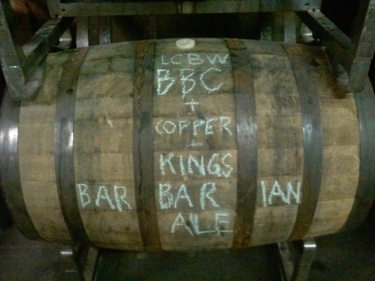 When Louisville Craft Beer Week commences on Sept. 12, there will be a new event in town – one that is a fully new concept.

That concept is called Lock, Stock & Smoking Barrels, and on Saturday, Sept. 20, it will feature a dozen barrel-aged beers – using brandy barrels, mind you – brewed just for the event by local and regional breweries. It was the brainchild of John King, executive director of the Kentucky Guild of Brewers. While Louisville breweries often use bourbon barrels to age beer, brandy-barrel beer is a new concept locally.

He ran into Joe Heron, co-founder of Copper & Kings Distillery in Butchertown, and pitched the idea.

“This has never been done before during craft beer week,” King said. “We’re so bourbon focused. … I had this idea; there is a local brandy place that’s brand new. Why don’t we become friends with them? Let’s be the first ones to use their barrels.”

King pitched the idea to Heron, who works out at the same gym, and discussions commenced regarding logistics.

“I initially thought, ‘They’re so busy, they might not go with it,’” King said. But he was wrong. In fact, Heron had a similar idea in mind already.

“We always imagined beer being aged in brandy barrels,” Heron said. “This was always on our agenda. That John enabled us to do it in concert with all the regional brewers was simply serendipitous, as all the greatest things always are.”

The beers sound, well, delicious. The barrels are Copper and Kings apple or grape brandy barrels, by way of fresh bourbon barrels from Woodford Reserve. Here are a couple of the entries:

That’s just a small taste of what’s in store. There will be other beers available as well, but you won’t want to miss these limited-edition brews. Heron certainly is looking forward to tasting them. 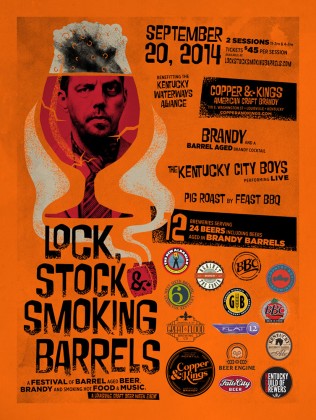 “The beers are still aging,” he said. “The concepts are all terrific – but still in the barrels, so I am going to have to taste them all on the day” of the event.

Lock, Stock & Smoking Barrels also will help raise funds for the Kentucky Waterways Alliance. In addition, there will be live music by the Kentucky City Boys. Of course, you’ll want to have something to wash down with these beers, so Feast BBQ will be having a pig roast.

In addition, there will be Copper & Kings brandy and special brandy cocktails available, and attendees will be able to take tours of the distillery. There also will be copies of “Louisville Beer: Derby City History on Draft” available at the evening session.

Heron said he is “really excited about the ambitious and expansive nature of the entire ‘smoking barrel’ concept – sublime beers aged in brandy barrels, cask strength brandy straight from the barrel, and also the rain barrel program from the Beargrass Creek Alliance. This imaginative scope says a lot about where we live.”

“It’s very unique,” King said. “And for a lot of these breweries, it’s the first time they have used brandy barrels, especially locally owned ones.”

Tickets are $45 per session, and for a limited time can be purchased at a discount online (discount code: brandyrocks). Discounted tickets ($15) are available for designated drivers.

King urged people to enjoy the unique beers while they can.

“A lot of these beers, you’ll never get to drink them again,” he said. “A lot of them, this is it – the rest, they’ll be going to out-of-state festivals.”

“I’ve been a to a lot of beer fests around the country … and tried some very cool beers and ciders,” Heron added. “But this is about as unique and special as I have ever seen.”