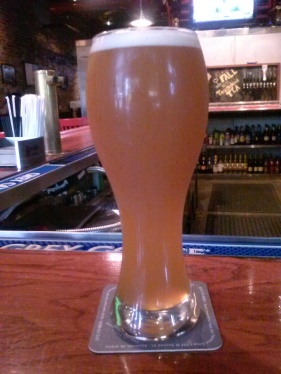 It was a long wait for Paul Ronau, whose wife Brandi opened Red Yeti Brewing back in May. The restaurant portion took off quickly, backed by a lineup of guest taps. But brewing had to be placed on the back burner.

But Ronau, a long-time home brewer, kept things moving forward, installing a small brewing system and getting all the licenses in place. He began brewing a few weeks ago, and the culmination was the Saturday release of Sterling Pale Ale, named for the Sterling hops with which it was brewed. The first tapping was not a full keg, so it sold out quickly, but a full keg went on tap on Oct. 14.

The result of Red Yeti’s first effort is a very drinkable beer that is sort of a cross between an English mild ale and an English bitter. The cloudy, golden ale isn’t what most will think of when they hear the term “pale ale,” which to many alludes to something hoppier and more bitter. Sterling Pale Ale is lightly carbonated and smooth in the more traditional pale ale vein, with a dry finish that yields only a small amount of bitterness and just a hint of grapefruit.

At just 38.7 International Bittering Units (around the same as Sierra Nevada Pale Ale, although the Red Yeti beer is much lighter in body), it has a deceptive 6.4 percent alcohol by volume.

“This is kind of where I tested my equipment,” Ronau said of this first batch. “I tested my processes.”

He added that the next version of the pale ale will be “dramatically different,” including being fully filtered. He didn’t “clear” the first batch completely because, “I was ready to get something out.”

Next up, he said, are Rose Island Red (named for the former Charlestown, Ind., amusement park), a honey porter, and his signature IPA, HopIPAtamus. He said Chef Michael Bowe has even approached him about doing menu-crossover beers; a butternut squatch porter may be in the offing.

Ronau, who is a technology analyst for UPS, sources hops locally whenever possible; he has been using a French Lick, Ind., hop grower called Poppy’s Hops. This echoes the local-first approach of the restaurant side of the business.

On Tuesday, several locals sat at the bar sipping Sterling Pale Ale and seemed to be enjoying it. But when it’s gone, it’s gone, and in a couple of weeks, it will be Rose Island Red’s turn. Expect a hoppy version of a red ale with that release. Meanwhile, the first iteration of Sterling Pale Ale is available while it lasts.

“You’ll never have this again,” bartender West Harris told me.

Red Yeti is located at 256 Spring St. in Jeffersonville, just a block from the Big Four Bridge. This post was originally published by Insider Louisville.