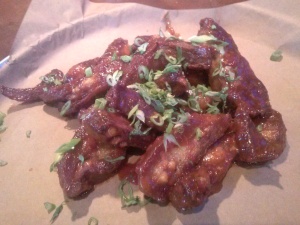 Just when it seemed like Against the Grain Brewery & Smokehouse couldn’t possibly fit anything else on its plate in the wake of firing up a new brewery in the last couple of months and launching its first line of canned beers, it has. Literally.

Co-owner Sam Cruz announced in a press release that Chef Jordan Delewis has unleashed a new menu for summer that expands the brewery’s selection of smoked meats while adding a few new wrinkles, including caramel-bacon popcorn and donut holes, not to mention new cocktail options.

“Chef Jordan has put an emphasis on our smoked meats,” the press release crows.

Indeed. But that isn’t all. Hi-Five Donuts has invaded the dessert menu with bacon-glazed donuts topped with house-cured bacon. Even the desserts are meat. And the aforementioned donut holes are served with beer custard made, of course, with Against the Grain beer.

And if you crave a bar snack, try out the bacon-caramel popcorn, which is exactly what the name says it is, for $3, or perhaps some house-made barbecue beef jerky for $4.

I stopped in recently with two meat-focused menu items I wanted to try: the jerky and an order of “Hot Tips” — rib tips served with house hot barbecue sauce. For $9, I figured I’d get six or eight good-sized tips, then I’d move onto the jerky. Hey, this is an appetizer item — it didn’t dawn on me it would be a plate designed for sharing, even though it absolutely should have.

So, what was presented to me was a pile of barbecued meat, served wet. They didn’t give me silverware — they’re rib tips, after all. So I dug in.

The smaller bites were chewy, even crackly, while the larger tips were tender with crispy edges and full of pork flavor, nicely smoked. Plenty of fat is left on the tips, which was fine with me. The only obstacles were the occasional small bone tips, but that’s part of the fun with a dish like this.

The sauce is spot on for the dish, although I would actually prefer a bit more heat, as the thick, red sauce relies more on a sweet-ish Southern tangy flavor than the visible peppers. (Although, as you plow through, there is a slowly building, lingering warmth.) They’re also good left over, and my dog Darby got plenty of enjoyment from the rubbery bone tips.

I made a good call by pairing the meat plate with a pint of The Ballad of Hoppy Johnny, the IPA of choice on tap the day I visited; the brew offered mild hop (65.7 IBU) and a nice, dry fruity bitterness into the mix. 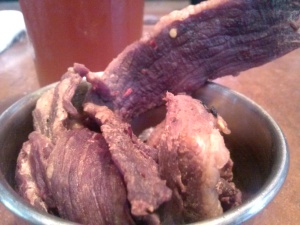 About halfway through, I asked for a to-go box and added some jerky to my order. And, to my great disappointment, they were out. I let out an audible groan, after which my server apologized. So I waited a few days and returned, and boy, am I glad I did.

For $4, I got a cup of about seven or eight strips of tender, peppery jerky that was not far removed from simply being flat iron steak. This isn’t the dry, stringy stuff you get at a gas station, this is nicely smoked and barbecued meat bursting with flavor that also has a slowly building heat profile.

I enjoyed my order with a California Common-style beer called I Left My Pride in San Francisco, but I have to say that jerky would actually partner well with a cabernet sauvignon or even a zinfandel. And if Against the Grain named its food the way it names its beers, they might call the jerky Get Your Own. Yeah, it was that good.

Anyway, I’ll say that if the rest of the new menu is as good as the jerky and Hot Tips, it’s going to be a good summer at AtG. A line of new canned beers and a production brewery that operates nearly 24 hours a day, seven days a week apparently is just a start.