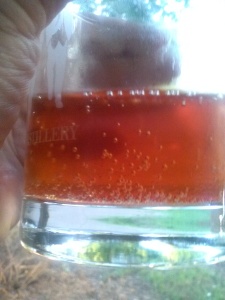 Yes, there’s still a lot of work left to do on the building at 525 Magnolia, the former site of a grocery store, but the brothers behind Old Louisville Brewing are working on beer recipes even as they build booths and prepare to pour concrete.

They gave me a couple of howlers on Saturday, July 25 – one was, quite surprisingly, a PB&J ale; the other, a jalapeno stout. Both recipes are in the tweaking stage, and both offer promise.

The PB&J was made with a base beer that brewer Ken Mattingly described as being akin to an amber ale. He said a previous recipe employed blackberries, but he didn’t get the flavor profile he wanted. Brother Wade shushed him before he could tell me what he used for the second batch, but here’s the bottom line: If they were going for a beer that smelled pretty much exactly like a peanut butter and jelly sandwich, well, mission accomplished. It was uncanny, to be honest.

The flavor was probably 90 percent there as well. Actually, the base beer barely makes an appearance in this crisp, well carbonated beverage. It’s tart without being sweet. And the damn thing will take you back to the lunches your mom sent you to school with when you were a kid. For my palate, well, a few ounces were enough. But for the right audience, this thing could theoretically give Apocalypse Brew Works‘ Watermelon Crack a run for its money next summer. In short, purists will probably hate this beer … but your mom will love it, and it will make for a great bridge for many who believe they don’t like beer at all.

The jalapeno stout was much more my speed and, while the recipe may need a couple of tweaks, it’s an enjoyable beer already. I was a bit surprised that there wasn’t more roasted malt in the aroma; in fact, even the pepper in the nose really didn’t stand out as jalapeno pepper. That distinctive smell just didn’t surface for me.

But when I took a drink, what I got was a smooth, solid stout with a medium malt character with some light coffee and maybe even a hint of chocolate in the mix. The pepper sits at the back of the palate and is subtle but, as one would expect, slowly escalates with each drink, eventually coating the throat. There is a tiny bit of acidity in the finish, and while I did very much enjoy the beer, I probably would have guessed cayenne as the spice here. The distinctive jalapeno flavor, much like the aroma, doesn’t really assert itself on the palate (or at least on my palate).

Of course, that didn’t stop me from finishing off the whole damn howler. And while I will reiterate that some tweaks might be a good consideration before the brewery opens (they hope to be up and running by October, but aren’t making any promises), I tasted plenty of potential for some good brewing ahead.