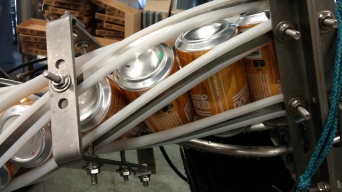 To put that beer in a can seemed like a natural fit for the Goodwood team. On Tuesday morning, it happened for the first time, as Goodwood canned roughly 780 cases for distribution in Louisville and across Kentucky.

Rather than install an expensive canning operation, Goodwood opted for an offsite canning company to come in, set up a mobile canning line on premises, can the beers, then dismantle the line and move on. The practice has become more and more common with the popularity growth in craft beer.

“It’s busy,” says Mo Oelker, founder of Toucan Mobile Canning. “Business is good. That’s why we got into this business, because of the craft beer explosion.”

Oelker actually is associated with Logan Aluminum, a company based in Russellville, Ky. While the golden yellow cans being filled with Louisville Lager this morning were manufactured in Guadelajara, Mexico, much of the aluminum was produced in Kentucky — appropriate, given the contents. 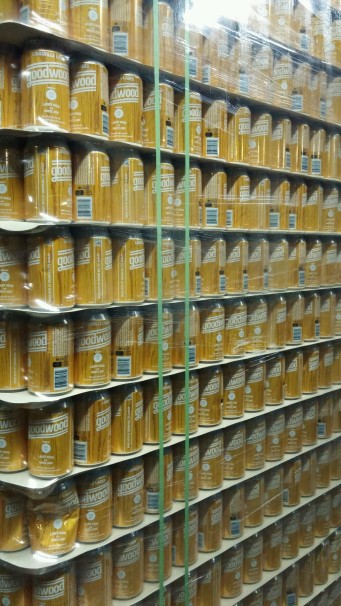 Can manufacturers in the United States are “maxed out,” Oelker says, forcing many operations like Goodwood to employ a company called Envases Universales to provide the can manufacturing. The empty cans are shipped to the brewery, which is when Toucan comes in. Oelker, whose company owns two mobile canning lines based in Nashville and Atlanta, says Toucan does several canning jobs per week across the Southeast.

This is the first canning job for Goodwood, but the brewery’s plan is to can roughly once a month going forward; that will increase if sales are good.

“We’ll continue to ramp it up and see where demand takes us,” says Goodwood CEO Ted Mitzlaff. “Let the market dictate.”

Goodwood president Phil Dearner says other Goodwood brews ultimately will be canned as well. Asked which ones, both Dearner and Mitzlaff fall silent and look at each other.

“I’ve always had an infatuation with a 16-ounce pub can of Bourbon Barrel Stout,” Dearner finally says, but adds that the popularity of the Walnut Brown may demand that one will come first.

Against the Grain Brewery became the first Louisville craft brewer to start canning its beers earlier this year when it included a canning line in an expansion in Portland. Currently, it cans staples like Citra Ass Down, the Brown Note and Sho’ Nuff Golden Ale in 16-ounce cans that are sold in four-packs across the country. Louisville Lager will be sold in 12-ounce cans as six-packs for a retail price between $9.49 and $10.99, depending on the retail outlet. Cans are expected to hit stores later this week. 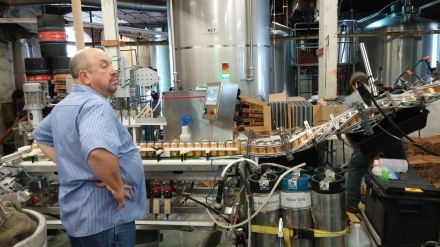 The Toucan mobile canning unit actually was set up Monday evening, after which is was sterilized. Before canning, it was again cleaned, rinsed and sterilized.

The machine feeds empty cans straight from palates into a “twist rinse,” which turns the cans upside down for rinsing, and then sends them through the line to an automatic fill machine. The filled cans are then sealed, after which they are returned to their cases and plastic six-pack holders are applied by hand. The machine was running about 36 cans per minute this morning, or about 100 cases an hour.

The Goodwood team was hard at work and quite excited for this next step in the brewery’s growth, envisioning people enjoying canned Louisville Lager on golf courses and boat outings.

“A crushable yellow lager in an aluminum can?” Dearner says, and shrugs. “Seems like a perfect fit to me.”