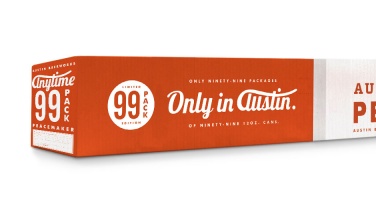 Sometimes if I’m buying cheap beer for band rehearsal or some other situation in which buying beer in bulk is appropriate, I find myself wondering just which multi-pack to get. The 12-pack is the most common specimen; but the 18-pack, when on sale, is a much better deal.

But there’s also usually a 24-pack available. And some brands even offer a 30-pack. Luckily my band only has five people in it, so we don’t usually need one of those.

But Austin Beerworks has taken it a step farther. No, scratch that; it has taken a case of beer 69 steps farther. It has created the world’s first ever 99-pack for its Peacemaker Anytime Ale. The price? $99.99.

If it sounds like a gimmick, it’s because it is. It’s a just a really cool and fun gimmick. Only a very limited number of these behemoths will be sold, and their whereabouts will be revealed via social media as part of a contest promotion.

Austin Beerworks teamed up with Helms Workshop, an Austin-based brand design studio to create its beast of a party pack. It is, according to a press release, the brewery’s first-ever advertising campaign, so why not make a first-ever case of beer? It also corresponds with a name change for its signature beer, which previously was simply called Peacemaker.

“We wanted to launch the newly-named Peacemaker with our first official advertising campaign,” Michael Graham, co-founder of Austin Beerworks, said. “While brainstorming with Helms Workshop – who do our stellar branding – we came up with the strategy that Anytime is a good time for a Peacemaker.”

The brainstorming session led to a long list of occasions where Peacemaker would be an appropriate beer. It’s a light, sessionable beer that would be great for backyard barbecues, ballgames that go into extra innings or overtime, wedding receptions, bachelor parties or, heck, a band rehearsal that goes deep into the evening. It’s moderately alcoholic at 5.0 percent, and is mild at just 15 IBU.

The newly branded beer even got its own website separate from the brewery’s, where fans of the beer can share their “anytime moments.” 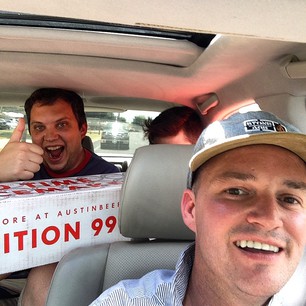 “My anytime is late afternoon when it’s hot out,” said Chris Bell of Allendale, Texas, in a testimonial on the site, “coasting through the park on my cruiser. I don’t use a koozie – I like to represent.“

And the marketing campaign wants to make sure everyone knows that the 99-pack is no hoax.

“Let’s be clear: it’s real. Like, really real,” the website crows. “Right now, as you read this, ice-cold 99-packs are waiting for you in select stores across Austin. To score one of these rare boxes of beauty, follow Austin Beerworks on Instagram, Twitter andFacebook for details.”

The 99-pack contains 86 pounds of beer, according to the campaign, and its more than seven feet long. That’s a lot of beer. So, yeah, this is not something you’re going to be able to carry out of a liquor store on your own. Heck, you will probably need a pickup truck.

There’s also going to be a full outdoor and print campaign to back up the social media and word-of-mouth efforts. Look for #AnytimeAle tags on a Twitter feed near you.

It’s all in good fun – just watch the video, which is fairly silly in its own right. But apparently the promotion is going over well. So well that – who knows? – maybe the idea of a 99-pack of beer will become a regular thing in the world of beer.

“What started out as a joke became very real when we realized how much people love the idea of 99 beers for $99.99,” Graham said.

Too bad my band doesn’t rehearse in Austin, Texas.