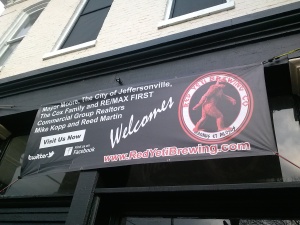 Another microbrewery and pub is set to open in early 2014 – Red Yeti Brewing nears completion of its brewing operation and restaurant after completely overhauling a two-story structure in downtown Jeffersonville.

Owner Brandi Ronau said she and her husband Paul Ronau have been planning the brewery for three years, and renovations to the building at 256 Spring St. have been going on for about a year. Brandy said Red Yeti just got approved for a liquor license to have a full bar in addition to house-made beers.

The project has been longer in the making than planned, as the structure required more work than expected.

“When we came in, it was in worse shape than we originally thought,” she said. “The only thing left [of the original structure], pretty much, is the brick and concrete.”

The menu will consist of pizza, burgers, sandwiches and appetizers. Meanwhile, she said, Red Yeti hopes to start out with three in-house beers along with a number of guest taps pouring other local, regional and national craft beers.

The three beers Paul will brew include “HopIPAtamus,” a red or brown ale, and a pale ale, for starters. 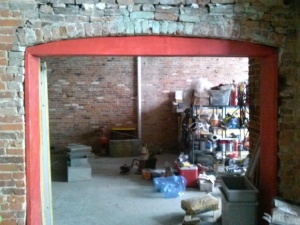 Doorway leading into what will be the bar/pub area at Red Yeti.

Considering the space is basically gutted at the moment, with fireproofing halfway done to the ceiling – the Ronaus live in the upper floor of the building, which also had to be renovated – the end of January may not be an attainable goal, Brandi said.

Just inside the main entrance is a white board with a long to-do list, detailing everything that still has yet to be finished, from installing the hood system to finishing the brick walls to building out the bar and installing the brewing equipment.

Yes, it’s a long list, but fingers are firmly crossed in the Ronau household. “End of January,” she said. “That’s what our contractor is telling us. Hopefully it comes together.”

Red Yeti will be the only craft brewery in Jeffersonville when it opens. And while the Ronaus have received overwhelming public support, one Facebook critic — someone named Paul Ranney — admonished Red Yeti last month because the brewery will not feature American light beers on draft.

“I look forward to your early closing so someone else will open a pub people can frequent for the beers people love,” Ranney wrote. “Why in the world would you not serve the best beers instead of craft crap is a testament to stupidity.”

A number of people stopped in while I was there talking to Brandi Ronau, and each of them seemed excited that a brewery was about to open in downtown Jeffersonville. Other feedback on the Red Yeti Facebook page has been positive as well, in part because Red Yeti has already been getting involved in community activities, from trick-or-treat festivities to letting a local vintner set up and share their wares just inside the front entrance.

“You can’t make everyone happy,” Brandi said of the craft-beer hating naysayer, and then smiled.

The name of the business actually comes from Paul, who will be the head brewer. He is a tall, red-haired man whose friends nicknamed him Red Yeti, prompting him to use that name as his online gaming profile.

Naming the brewery after the brewer seemed like the logical choice; it’s also just a pretty cool name for a brewery. The logo even features a red Sasquatch-like creature wearing sunglasses.

Paul began home brewing several years ago and was motivated to open a brew pub by the fact his friends began asking him to brew his beers for gatherings.

“They would pay for the materials, and he would brew it,” Brandi said.

Paul said HopIPAtamus (pronounce it similarly to “hippopotamus”) is his signature brew, with Stone Ruination IPA serving as its inspiration. HopIPAtamus will have a similar profile, packing 92 IBU (International Bittering Units) and 7.5 percent alcohol by volume.

Since the build-out is ongoing, he isn’t sure yet how many Red Yeti beers will be brewed. While three is the safe number, he would like to see five or even seven.

“A lot of what we’re deciding to brew is based on cellar capacity,” he said.

Getting Red Yeti up and running will be first priority, however, meaning guest crafts will probably inhabit the taps for the first few weeks of operation. After that, look for the 6-foot-3-inch guy with red hair, and ask for a HopIPAtamus. 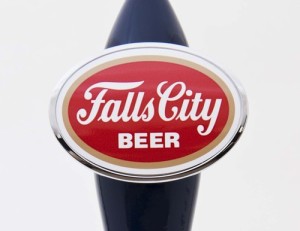 Falls City has dropped a couple of new brews at its tap room on Barret, and I managed to find time during a busy weekend to stop in and give them a try.

One is a nicely sessionable APA dubbed MCApa. Here’s how Fall City describes it: “This single hop Session APA is brewed with 100% Citra hops giving it a tropical fruit character.  Hints of grapefruit, pineapple, orange, and melon are complemented by a soft malt profile.  4.5% abv, 50 IBUs.”

I had but a sample, but I found it to be quite crisp with some bite, but very drinkable (like a good session ale should be). I expected based on the description above more of a citrus flavor, but my buds only detected it at a mild level, giving way to the hop flavor. That’s a compliment, by the way. I’ll be having more of this.

The other recent addition is Idlewild Stout. Here’s the description on that one: “This American stout is brewed with flaked oats and chocolate rye giving it a smooth, creamy mouthfeel with hints of chocolate and caramel.  A slight hop presence helps to balance out the rich malt character.  5.9% abv, 34 IBUs.”

This is an interesting brew. Anytime I try a stout, I can’t help thinking, “How is this going to be different than Guinness?” This one has a thin head and even a detectable carbonated body feel (not too much, but I wasn’t expecting it). What I really enjoyed is that this beer, to my palate, tasted almost like a liquid version of Hershey’s Special Dark. I know there are better dark chocolates, but not being a big candy eater, that’s my reference point.

Idlewild is a dark beer, and the hops do add unexpected character, but it’s also a beer your mom could drink and be happy with.

For what it’s worth, I’m a fan of both. Of course, I’ve liked most of what Falls City has brewed so far, so I may be a little biased.

Attention homebrewers: Bluegrass Brewing Company is serving up the opportunity for some serious bragging rights on Sept. 15 with its American Homebrewers Association rally and brew-in. Not only is it the first AHA rally in Kentucky, but if your brew wins the accompanying competition, BBC will brew  your concoction in its commercial system and put it on tap for the next full year.

The theme of the competition is session IPA, and BBC will mash one common wort of 12 Plato (1.048) from domestic pale malt to serve as the base for everyone’s beer. According to the rules, brewers may add up to three adjuncts, specialty or steeping ingredients.

This rally is designed to promote homebrewing in the local community and to drive membership for homebrewing clubs and the AHA. The event is, of course, part of Louisville’s Craft Beer Week, and is free and open to the public. Find out more at the official Facebook event.