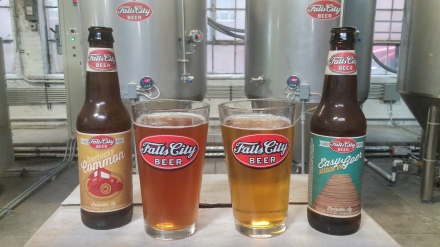 Surrounded by case after case of Falls City Beer, Louisville Mayor Greg Fischer proclaimed March 1 as “Falls City Beer Day” in recognition of the brand’s new product line and look. The announcement was made a press conference at the brewery in Portland.

The announcement includes two new immediate releases in Kentucky Common and Easy Goer Session IPA, as well as three other new seasonals that will be sold in bottles and taps: Heather Ale, which will be available in late winter; Harvest Ale, available in the fall; and Red Rye Lager, available near the end of the year. In addition, Falls City representatives introduced redesigned packaging.

Fischer talked of his youth growing up in Louisville when Falls City was still a widely available beer. The original Falls City was founded in 1905 in response to a local monopoly on brewing, but it folded in 1978 following the failed release of Billy Beer. In 2010, it was revived by a local businessman, and last year was sold to a group of investors who also owns Old 502 Winery and Over the 9, a restaurant in the brewery/winery complex at 120 S. 10th St.

Kentucky Common is a beer style that is indigenous to Louisville and was being brewed here by the mid- to late-1800s. A dark, cream beer, it was a cheap and fast beverage to produce and take to market. It also was easy to drink and contained low alcohol, making it a favorite in Louisville’s taverns. It is estimated that about 80 percent of beer-drinking Louisvillians prior to Prohibition drank what became known as “common beer” or “komon beer.”

Fischer called it “a real milestone” that Falls City is rolling out the beer style as part of its core product line, pointing to a craft beer committee he formed two years ago to help promote brewing in Louisville. He noted that one of the key initiatives was to “reconnect Louisville with its distilling roots and its brewing roots.”

Falls City brewer Dylan Greenwood talked briefly about the history of the beer, which is made with similar ingredients used in distilling whiskey.

“We’re happy to bring it back to the masses,” he said. “Not only does it have a good history, but it’s a good beer.”

Easy Goer Session IPA is a lower-alcohol version of a currently popular beer style. Made with Palisades and Citra hops, it is less bitter than most standard IPAs and checks in at just 4.5 percent alcohol by volume.

“At 4.5 percent ABV, you don’t have to feel bad about drinking more than one,” Greenwood said.

These beers join Hipster Repellant IPA, which by comparison is 6.3 percent ABV, and Falls City Pale Ale, which was the first new beer the brand released in 2010. Much of Falls City’s brewing is currently brewed out of state, but the local facility will continue to brew limited monthly releases as part of the Falls City 7-Barrel series. These will be available only on draft at Over the 9, beginning with a Maibock, a malty German-style beer, and another beer style that was historically popular in Louisville.

While versions of Kentucky Common can be found periodically at other area breweries, Falls City CEO Cezary Wlodarczyk believes making it part of the brand’s base product line puts the brewery in “a unique position.” He specifically stated his goal to make the beer available at Churchill Downs and other iconic spots that are uniquely Kentucky.

“Falls City Beer is a brand that is totally connected to Louisville,” Greenwood said, “so not only is this a huge day for the brewery, but for the city as well. You can still see old Falls City signs on buildings around town. With new bottled beers like our Kentucky Common, we’re saluting local history but also producing well-balanced craft beer with the quality and variety beer fans now expect.”

Fischer added, “Falls City is iconic to Louisville, and watching its growth in the last handful of years is very exciting and meaningful to our city’s Renaissance of craft beer and spirits.”

Cezary Wlodarczyk understood the good news and the bad news when he agreed to become CEO of Falls City Brewing Company a few months back.

On one hand, Falls City is a brand many people in Louisville remember as a beer their parents or grandparents drank. In that way, brand recognition is built in.

“I’ve met hundreds of people, whenever they see me, they recognize the logo, they walk up and they say, ‘You work for Falls City?’” Wlodarczyk says. “’Oh, I have a piece of something, an old bottle, an old can, an old piece of marketing or something at home.’ It’s fantastic. They have memories. Many of them have very good memories.”

“Unfortunately, many have not so good memories of the quality of the beer,” he continues. “It wasn’t that good in its very late stage of life. It really hurts to hear that. But it is part of the history, and we have to face it.”

And so, Wlodarczyk, a native of Poland who has long worked in spirits branding and marketing, has the task of redefining a brand that literally is more than 100 years old in a beer marketplace that is as competitive as it’s ever been. Falls City is not the first brand that comes to mind when one conjures good beer, and Wlodarczyk knows that has to change.

His commitment to this change starts at the ground level, by encouraging people to try the beer with an open mind. In addition, he is working feverishly to get the retail and distribution channels to commit to the brand. For him, however, the hard part is already done: Falls City, he believes, is already making top quality beer.

He just has to build that buy-in elsewhere.

“We are trying to revive the brand,” he tells Insider. “We have started it from scratch. The brand used to be here, and many people remember it, but we are moving the business from scratch at a very low level. We’re influencing people, trying to convince distributors to buy into our plan, to treat us as part of their portfolio. In order to do that, they have to buy into the future of the brand.”

This isn’t the biggest challenge of the ever-positive Wlodarczyk’s career, and certainly not of his life. He was an integral part in branding the Jack Daniels brand for Brown-Forman. (As he puts it, anytime you order a Jack and Coke on the rocks, “I had a big piece of sweat, time and effort in this.”) His career in spirits came after seven years living in Mexico and marketing products for Procter & Gamble.

But those aren’t challenges. Wlodarczyk grew up in communist Poland at a time when his family would wait in line for five, six, seven hours almost daily “just to get a piece of meat.”

People would wait, only to be routinely turned away empty-handed. There was zero freedom of speech, and paranoia reigned because secret police were everywhere. Each person got two coupons per year that were good for a pair of shoes — poor quality shoes, at that.

“It was better than going barefoot,” he says. “That was daily life.”

Selling good beer is a blessing by comparison.

Wlodarczyk is eager to tell his story, and he is quick to engage anyone he meets. During an interview at Over the 9, the new-ish restaurant and bar in Portland that also serves as the headquarters for Falls City and Old 502 Winery, a Falls City employee approaches him to offer a sample of some treats she’s brought in.

He eagerly accepts and tells her, “You always look beautiful, but today you look more beautiful than ever.”

This is a man who is enjoying life and his place in it. He sips a Kentucky Common, one of 10 brands Falls City brewer Dylan Greenwood is making consistently, and raves about its drinkability and history. He talks of a focus on quality and a three-year plan to expand on-site brewing operations so that all production happens in Louisville (currently, much of Falls City’s beer is brewed in Nashville under Greenwood’s supervision). He sees a bottling line and possibly a canning operation in the future.

Over the 9 has already transformed the space; a complete makeover from gift shop and tasting room to restaurant is complete, and an overhauled menu will debut in early November. Colorful, branded imagery splashes on monitors above the bar. Wlodarczyk sees all this as progress for the business. He sees progress for Falls City.

More than anything, he sees a brand that will return to past glory, but for different reasons than in the past. He envisions Falls City as a regional go-to brand, one that is now currently in every Kroger store in the city. The Falls City Kentucky Common is already hitting taps around town and in Indiana. And with new brews like Imperial IPA, Session IPA, Red Wine Barrel-Aged Cream Ale, Barleywine, Downtown Brown and Berlinerweiss joining its flagship Falls City Pale Ale and the popular Hipster Repellant, Wlodarczyk feels many are about to be surprised.

Greenwood is just as hopeful, praising Wlodarczyk’s energy and leadership.

“He’s a fun dude,” Greenwood says. “I think we’re going to grow exponentially; we’ve got everything going for us.”

Wlodarczyk knows it won’t happen overnight. He’s been there before, when the stakes were much higher, so he has patience to go along with his confidence.

“We’re taking it one pint at a time,” he says. “It’s a slow process; talk is not enough. We have done enough damage in the past that people remember that. After we talk now, we say, ‘Now, try our beer. Hopefully you are convinced by the quality and not by our voice.’ It’s working in 99 percent of the cases. We’ve invested and we’ll maintain the investment in the quality of our beer.”

He mentions the Louisville Independent Business Alliance’s “Keep Louisville Weird” campaign, and says he fully supports it. He also says he speaks with LIBA director Jennifer Rubenstein on a regular basis, and is quick to remind her of one thing: “We’ll not only keep Louisville weird,” he says, “but also well hydrated.”

Believe it. Wlodarczyk certainly does.