The national Brewers Association reported a 17.1 percent rise in craft beer sales in 2013, despite the fact beer sales were down overall.

Louisville, of course, bears the mark of this popularity surge we’ve been watching the last few years: For instance, Against the Grain Brewery & Smokehouse is distributing around the country and into western Europe, and announced a $1.7 million expansion in Portland.

Meanwhile, Great Flood Brewing opened to much fanfare in the spring, Apocalypse Brew Works is quietly working on expanding its brewing operations, Bluegrass Brewing Company released a new product called Louisville Lager, Falls City is again brewing in town and, across the big watery divide, New Albanian Brewing Company soldiers on, Red Yeti has begun brewing (finally) and Indy’s Flat 12 Bierwerks has opened a taproom in Jeffersonville that will next year turn into a full-fledge brewing operation.

Heck, even tiny Cumberland Brews shows no signs of slowing down in its cozy Highlands location. Good food and good beer are always a winning combination.

And as Louisville Beer Store, Holy Grale and Sergio’s World Beers keep pushing the goods, LouisvilleBeer.com keeps the hardcore beer nerds informed. It is with that we’ll take a quick look at five new breweries that are either on track for or are working toward opening in 2015. (You can check out a full list of breweries-in-progress around the region and state at the aforementioned LouisvilleBeer.com.)

Akasha Brewing Company: We caught up a few weeks back with co-owner/brewer Rick Stidham, who was originally eyeballing a December open date. Looks more like early 2015 at this point, but Stidham continues to burn the midnight oil to get his space in NuLu (and the beer it will produce) ready for consumption.

Located at 909 E. Market St., Akasha will be close neighbors with Feast BBQ, which opened recently in the same complex. Stidham has a collection of seven-barrel fermenters, plus he’s building out a barrel room, an open fermenting space and, of course, a cozy taproom with a bar and plenty of taps.

Right now, it’s a matter of getting the space built out and getting the brewing started, both of which have been delayed, but construction continues.

“I literally have people working night and day,” Stidham said. The target opening right now is late January, and the smart money is on this brewery to be the first one to open in the new year.

Beer Engine: Ian Luijk and Brian Holton, owners of this Danville-based brewery, deserved better. They bought the old Zeppelin Café (1036 E. Burnett Ave.) in 2012 with the plan to open a Louisville location, and they’ve been battling zoning issues, construction problems and just plain bad luck ever since. But you know what? They’ve persevered, kept a positive attitude and stayed active in the Louisville beer scene. Hell, they may even beat Akasha to open the doors in 2015.

Armed with a 10-barrel system and plenty of good beer recipes, Luijk and Holton appear poised to open in early 2015, perhaps around the same time as Akasha. Look for 10 or 12 house brews as well as some deftly chosen guest taps. The space is about 10,000 square feet, which will include a brewery, barrel-aging room, a patio, a stage, a kitchen and plenty of seating for around 250 thirsty people.

“Things are still moving along,” Holton said recently. “We were hoping to brew by the end of this month, but that’s not going to happen.”

Holton said a chef has been selected to build the menu and run the kitchen, but that his or her name won’t be announced anytime soon. He also doesn’t have a target open date, although March “is a fine guess.”

He added, “Man, I never thought it would take this long.”

Donum Dei Brewery: Over in New Albany, at 3211 Grant Line Road, just a stone’s throw from the original New Albanian Brewing Company location, is another brewery in waiting. Richard Otey is brewing in his new space, which is nearly complete. However, he still is yet to offer a target opening date.

Originally, he told us he had planned to open sometime around Derby 2014; that prognostication later changed to summer, and then to Thanksgiving. Now, early 2015 looks most likely. But Donum Dei already has a batch of its pale ale brewed and ready to drink, as well as an enkle. Up next is wee heavy.

Kegs have been purchased, and the buildout seems mostly complete. Otey is doing most of the buildout himself, using reclaimed materials whenever possible, from rescued wood to 1940s-era mirrors to chairs from an old Wendy’s restaurant.

I stopped by recently, and the place looks within reach of opening. Still, Otey hesitates to throw out a deadline.

He did tell me how he acquired his reclaimed brew kettle, which was purchased from a brewery in Vancouver Wash. — he found it on Craigslist.com on a Friday, left in his truck to pick it up on Saturday, and had it back at the brewery by Wednesday. He called it a five-day “turn and burn.”

Otey gave me a sample of the Donum Dei pale ale, his first test batch, that sure tasted better than a test batch — moderately hopped, it was well balanced and right on the money. He also gave me a sample of a roast beef panini that will be representative of the future food menu — another thumbs up. Expect sandwiches, soups, hummus and other such small eats once Donum Dei opens.

When will that be? Hard to say, although he admits February should be doable. Of course, as noted, last February he began construction hoping to open by Derby.

“I didn’t say which year,” he clarified with a smile.

Bannerman Brewing: Located in Clifton, just down the street from Apocalypse Brew Works on Mellwood Avenue, Bannerman was brewing small batches, waiting on more brewing equipment and working hard at building out its rather large space late last year, with talk of an April 2014 grand opening. In fact, at one point, a Bannerman representative estimated to LouisvilleBeer.com that it was 90 percent finished. And then everything went quiet.

Having tried a couple of brewer Cory Riley’s beers, I was pretty bummed out. In fact, I had nearly given up, but then in November, this post appeared on the future brewery’s Facebook page: “It’s been a long while since we’ve updated the page … Rest assured we’re still chugging away at the project so that you guys can be chugging away on some Bannerman brews soon!”

The last previous post was in January, nearly a year ago. So, maybe Bannerman is going to be a reality after all, which is why it is included here. I reached out to brewer Riley, and he confirmed things are still moving forward, if a bit slowly.

“Same as it ever was,” he said in a Facebook message. “Going well. No target dates.”

If my samples of Riley’s high-octane brews are representative, Bannerman will be worth the wait.

Old Louisville Brewing Company: This is one that is just getting its ducks in a row, with brothers Ken and Wade Mattingly having procured a property at 615 Magnolia near Gallery House and across from (duh) 610 Magnolia, and begun construction. Based on photos posted on Facebook, Old Louisville Brewing has a ways to go before it starts brewing and serving beers, however.

But it sure appears there’s a lot of hard work going on down there since the building was procured in August and a building permit was issued in late November. Issues with the building’s foundation seemed to confound the Mattingly brothers at first, but work continues on. On its Facebook page, Old Louisville says its goal is “to be a destination place that is a community hangout.”

Hey, if there’s freshly brewed beer to be had, then “destination” and “hangout” are solid goals to have.

The original target date for Old Louisville’s opening was early 2015, but that appears to have been overly optimistic. It would be a fair bet that this one will drag on into the summer or maybe even the fall. Here’s hoping things go smoothly from here forward. 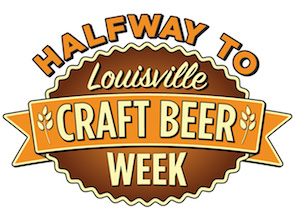 Hard to believe we’re already halfway there. But hey, any excuse to drink a local craft beer is a good excuse. So let Halfway to Louisville Craft Beer Week commence.

The inaugural halfway celebration leading up to Louisville Craft Beer Week in September will feature beer dinners, tap takeovers, pint nights, special beer releases and plenty more. And much like its big brother event, it is expected to draw people from all over the state and beyond.

According to a press release, Halfway to LCBW “is an effort to enhance localism, beer knowledge, and appreciation of the positive growth in the Kentucky craft beer industry.” It’s also a good chance to drink a beer or two with your friends.

Here are some featured events:

There also will be an oyster stout release — with raw oysters added to the menu — at Against the Grain next Monday, April 21. A full list of events is posted at LouisvilleBeer.com, one of the event’s sponsors, along with Boombozz Taphouse in the Highlands and others.