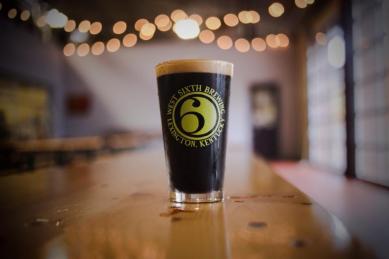 A fresh press release from the fine folks at West Sixth:

West Sixth Brewing announced today the fourth beer that they will can and produce year-round: the Pay it Forward Cocoa Porter.

This beer, which is an American robust porter, has been brewed with Organic, direct-trade Cocoa nibs. Nearly opaque with a tan head, this beer clocks in at a 7% ABV and is dominated by roasty malts and a strong aroma of chocolate.

“We’re very excited to announce that this fall, we will begin canning one of our most requested beers: the Pay it Forward Cocoa Porter”, said West Sixth founder Brady Barlow.

The Pay it Forward Cocoa Porter was first made available on draft in 2012 for the launch of the Good Giving Guide put on by the Blue Grass Community Foundation. That challenge, which raised more than 1.5M for local non-profits in 2013, was the inspiration for its name. Since then it has been available on draft in the taproom, it has always been a crowd favorite.

In addition, West Sixth is launching a new charitable program along with the beer.  Founder Joe Kuosman said “From the very beginning, West Sixth has been not only about brewing great beer, but also about making a difference throughout the communities we’re a part of”.

“In order to live up to its name as the Pay it Forward Cocoa Porter, we are committing to giving $.50 per six pack to a local non-profit doing great work in the area the beer was sold in.” said founder Ben Self. “Those non-profits will be selected on a quarterly basis and will be chosen based on input from our fans and supporters.”

“One other thing we’re very excited about with this beer is that we’re able to source such great fresh Cocoa nibs to use when we brew the beer.” said co-founder and head brewer Robin Sither.  “By working with some great partners at Taza Chocolates, we can guarantee not only were the growers in Central and South America paid a fair wage for growing the beans, but also they were grown in an organic and sustainable manner, and are sent to us incredibly fresh.”

The beer will be available throughout West Sixth’s distribution area in kegs and cans beginning in September.