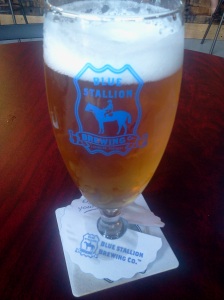 Took a mini-road trip with my girlfriend Cynthia on Saturday to check out the newly-opened Blue Stallion Brewing in Lexington: beautiful tap room, lots of German-style beers, a few guest taps and a welcoming feeling.

Oh, and would you believe this? Before they even opened, they were forced to change their logo by the local convention bureau. Maybe Blue Stallion and West Sixth could start a support group in Lexington for embattled logos. More on that in a moment, though.

Blue Stallion’s beers are of the German variety; pilsners and dunkels are the order of the day, but all the beers are lagered and filtered. In addition, a few ales make their way into the mix. But the main point at Blue Stallion is that the beers are, according to the brewery’s website, “approachable.”

At Blue Stallion, they “no longer accept that a casual beer needs to be yellow with no character or flavor.”

So if you’re looking for an Imperial IPA, well, know that the hoppiest beer brewed at Blue Stallion is the Pilsner, at 45 IBU (although they do have a few guest taps for hopheads). But it opens the door for a lot of people to find a beer they enjoy. Here’s a brief rundown:

Hefeweizen (3.8% ABV, 14 IBU): This one is smooth and fruity, with a hint of banana. Light body with a floral nose, it also offers up hints of clove. Imagine if Blue Moon didn’t suck, and you’re in the ballpark.

Scottish 70 Shilling (3.2% ABV, 20 IBU): Seriously? Only 3.2% alcohol by volume? Talk about sessionable – I could drink 10 of these and probably still be going strong. Actually, this is a very light brown ale with just a hint of caramel and malts, and as such was Cynthia’s favorite. It got its name because a pint of it would have cost 70 shillings back in mid-19th century Scotland. 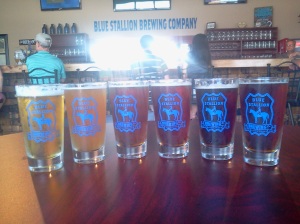 Munich Dunkel (5.4% ABV, 25 IBU): A mild version of a classic dunkel, this one has plenty of malt character and a bit of sweetness. In fact, Cynthia referred to it as “adult root beer,” which isn’t far off. This one packs a bit more punch than the Hefe or 70 Shilling. Solid.

Smoked Lager (5.7% ABV, 19 IBU): This one is smoky, as you’d expect, but not offensively so. If you’ve had the smoked beers at Against the Grain, for instance, you know a strong smoke flavor. This one is not nearly as bold; in fact, the smoke presence is just enough to wake up the taste buds. It also leaves a nice tingle on the palate. According to the Blue Stallion website, this beer is based on a German legend: “An accidental fire in a small regional brewery exposed the stored malt to the smoke for several hours. Because the brewer did not have the money to afford a new batch of malt, he was forced to use the smoked malt in his beer production.” People liked it, and it stuck. It may not be true, but it’s still a good story.

Wee Heavy (9.5% ABV, 28 IBU): Appropriately named because while it’s easily the heaviest beer currently on tap at Blue Stallion, it’s surprisingly light bodied. In fact, I was shocked when I learned it packs 9.5% ABV. The Scotch ale has flavor reminiscent of molasses. Be careful with this one, kids.

German Pilsner (4.9% ABV, 45 IBU): My favorite of the day, this is a classic German-style pilsner, with just enough hop bite to let you know it’s there. Crisp and slightly bitter, it features two different kinds of noble hops. More, please.

While there, I spoke to co-owner Jim Clemons, who told me the tap room was basically built out by hand, taking about nine months to complete. The bar, I noted, is quite high – so high that when one sits there on a bar stool, it puts the bar level at about chest high, leaving you eye to eye with your beer.

Clemons referred to it as the “uber-bar,” and said it was only designed that way due to piping that had to run under the bar and needed to be at a certain height. The bar itself is made from barrel slats, which gives it a rustic-meets-modern look.

Clemons said Blue Stallion may be the smallest brewery in Kentucky, at least based on output. He said whereas most brewers can get a batch of most beer styles ready for tapping in two or three weeks, it takes six weeks to finish a Blue Stallion beer, due in part to the lagering process and also due to the step mash process they use, which slows the heating process but also helps the brewers avoid using any acids or chemicals in the brewing process.

“We’re very proud to do it the old-fashioned way,” Clemons said.

There’s no food menu at the tap room, but people are free to order pizza delivery or bring whatever they like. One couple who sat at the bar and watched sports on the flat screens brought a bag of salsas and other dips from Trader Joe’s, and casually snacked as they sipped their beers.

Oh, and note that the logo on the glasses and at left is different than the one used on the website (bottle photo, above). That’s because the Lexington Convention and Visitors Bureau took exception to the original logo since it resembled their own. It wasn’t exactly a West Sixth vs. Magic Hat situation, though.

“They asked us to change the logo, and we did,” Clemons said. “We wanted to be accommodating.”

It’s commendable. One logo lawsuit in Lexington is plenty.