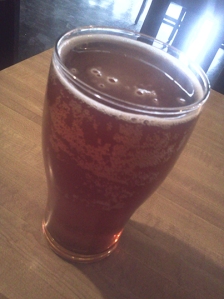 I got around this past weekend. I was actually in search of cider for a story I’m working on for another website, but I really like hoppy more than fruity. So I made it a point to have some Louisville beer along the way.

My first stop, on Saturday afternoon, was at New Albanian Brewing Company. I was in search of Gale’s Hard Cider, by way of Thomas Family Winery, but there were no bottles left (drat!). Instead, I tried a New Day South Cider, which wasn’t bad at all. Then I cleansed my palate with some breadsticks and had a (NABC) Pickman’s Ale, which is one I don’t believe I have tried before. I’m an APA guy, so I couldn’t resist, and it didn’t disappoint.

Anyway, it’s long on kick (6.5 percent ABV), medium on hops (52 IBU) and just what I needed to go with NABC’s spicy beer cheese. It has a burnt orange color, thin head, medium hop nose, just a touch of citrus tone and a quick hop bite that gets there before you expect it to. The hop flavor then continues to emerge drink after drink. Thumbs up.

Pick a beer. Any beer.

On Sunday, I watched some football with my pal Greg and had a flight over at Buckhead Mountain Grill in Jeffersonville, where Tisha Gainey always has a kick-ass selection. It’s always fun to use Buckhead’s Craft Beer App, in any case, scrolling through what’s on tap, separating the ales from the lagers and whatnot. I worked my way up the hops ladder (after tasting one Angry Orchard Cider) with Upland Campside Session Ale (4.5 percent ABV, 50 IBU); Daredevil Liftoff IPA (7.2 percent ABV, 72 IBU); Sun King Bitchn’ Camaro (8.7 percent ABV, 89 IBU), and Stone Ruin Ten Imperial IPA (10.8 percent ABV, 110 IBU).

I let Greg have a taste of the Stone Ruin. Here was his reaction: “That grabbed a hold of my whole mouth! Holy shit!” After that, he said, “I’m going back to my Miller Water.” 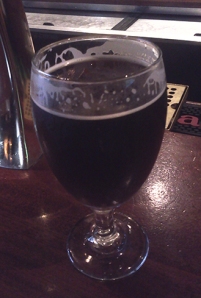 Apocalypse Brew Works Irish Red Rapture: So smooth and creamy, it’s like bathing in a pool of kittens.

A bit later, still on a quest to find ciders I could write about, we wound up at O’Shea’s Irish Pub in the Highlands. There, I was greeted by something on a different part of the beer spectrum, but also one of my first loves: an Irish red ale. But not just any Irish red — it was an Apocalypse Brew Works Irish Red Rapture. How could I resist? And luckily, my palate had been wiped clean by tasting samples of cider.

At 5.9 percent ABV and 26 IBU, it looks like a brown ale, and even has coffee on the nose. It’s so creamy and malty. This is the kind of beer I typically go for in fall and winter. I wrote in my notes, “Leah rules.” Obviously, I was referring to brewer Leah Dienes.

After that, I went home and watched football. And fell asleep in the process. Totally worth it.